Entering the Land of the Morlocks

Our tour of Biosphere included a tour of the “Technosphere” - the 3.14 acres of ductwork, pipes and machinery which allow life within Biosphere 2 to breathe, get moisture, and in general survive.
As soon as I stepped through the door into the tunnel, I immediately thought of H.G. Wells, and started looking for dangerous little humanoids that were clever with machines but might want to eat me.

None appeared, and our guide seemed well-fed enough for me to continue the tour, despite my misgivings.

For the engineers among us, a few facts:

The technosphere includes 26 air handlers that can control moisture and humidity as well as oxygen and C02 levels, and of course heat or cool the air as required.

Having so much control over temperature and humidity allows scientists to discover what happens if a rainforest experiences several weeks of drought. They cannot control the ocean, but at the coral reef in Biosphere 2, they can study corals respond to increased levels of CO2 or higher water temperatures.

Our guide told us about an interesting experiment in the rainforest. The biome was flooded with CO2, and it turns out that increased CO2 levels don’t lead to more and more plant growth. Instead, there is an upper limit to how much carbon that plants can absorb and sequester - and it is possible for Earth to go beyond that limit.

Not only that, but other studies have shown that increased levels of carbon dioxide can actually reduce the nutrient value of important crops like rice and wheat.

"Biosphere 2 Gives Up Some of its Secrets" - an informative article about the technosphere from The Green Valley News.

More Carbon Dioxide in the Air Makes Some Crops Less Nutritious
Posted by Tina Quinn Durham at 10:38 AM No comments:

No Diversity - No Survival

How much of the world can you squeeze into 3.14 acres?  Biosphere managed to fit an ocean, a fog desert, a rainforest, a mangrove wetland, a savannah, and agricultural areas that included rice ponds with tilapia, vegetable gardens, and grain fields.  Not to mention living space for humans and a variety of agricultural animals including pigs, goats, and chickens.  An impressive microcosm of large, complex planetary systems.

One detail particularly impressed me:  the planners included a fog desert specifically because the plants there are actively producing oxygen in winter, when flora in other biomes are dormant and not producing the oxygen we need to survive.  Suddenly, I realized why we need two hemispheres with winter in one and summer in the other, and how important it is that global weather patterns act like a planetary fan to mix all that oxygen up and move it around.

The inhabitants of Biosphere 2 suffered a debilitating shortage of oxygen despite the careful planning that went into creating Biosphere when exposed concrete absorbed both carbon and oxygen.  There were other setback too, when the pollinating insects died and the cockroach and ant populations exploded.  Even their bodies had to adapt to a low-calorie, high-nutrient diet, and the Biospherans literally felt hungry for an entire year until their metabolisms adjusted.

We cannot predict what effect climate change and altered weather patterns might have on our larger biosphere.  We already know that bees are in trouble, and flying insect populations are decreasing.  How that will affect the quality of human life and the success of our food production remains to be seen.

However, one fact is painfully clear:  humanity cannot survive without biodiversity.  To live, to breathe, to have potable water and survivable weather conditions, we need diversity.  Everything matters from the smallest microbe to the largest apex predator.

We do not exist in isolation from Biosphere 1.

Posted by Tina Quinn Durham at 11:13 AM No comments:

The Future of Arid-Land Farming: Aquaponics at Biosphere 2 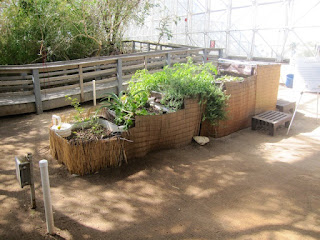 I was thrilled to see an aquaponic garden at Biosphere.  The basic idea is that fish poop in the water, the water is pumped up to the planting beds, the plants filter out the nutrients, and the water is returned to the fish tanks to be replenished with more organic nutrients from fish poop.  You can grow a variety of herbs and vegetables, and you can use different fish species too, depending on your climate.  In central and southern Arizona, most people seem to be use goldfish, koi and tilapia because it’s too warm for trout.  Catfish are a possibility too, but I haven’t seen much about people using them in Arizona.  That may have something to do with their water and filtration requirements compared to less demanding species like tilapia.

As human population continues to grow and demand for water increases, we will need innovative methods of food production - especially in desert regions like California and Arizona.  Locally grown produce and fish that’s organic and uses less water than traditional farming methods?  I’m all for it!

When humans begin to colonize other worlds, aquaponics will almost certainly play a role in their food production too.


By the way, our guide mentioned that one of his friends grows hops - an essential ingredient for home-brew beer - in his aquaponics garden.  Yep, there is definitely a future for aquaponics!

For more information on aquaponics, a good place to start is the National Agricultural Library (online) at the USDA.
Posted by Tina Quinn Durham at 7:13 PM No comments: