The End of Shelley and "The Indian Serenade"

Seriously, I am done. I have accumulated an embarrassingly large stack of notes about this poem, and have written my own ghazal; it is time to move on. But first, let me share with some highlights about Percy Bysshe Shelley and his famous poem.

Not everybody liked this poem (I wonder why?):

The absence of concrete imagery in 'The Indian Serenade' has been adversely criticized. The poem's natural world verges on the impalpable: the soft winds, vague perfumes, song of the nightingale, the invisible inaudible stream, faint, die, fall, just as the serenader does in his half-waking ecstasy. It is as if he had awakened from dreams of his lady into a world even more dream-like and indistinct (Park 11).

"In certain critical circles, 'The Indian Serenade' seems to have attained an eminence second only to Kilmer's 'Trees' as a favorite whipping poem" (Levin 305). The New Critics in particular condemned the line, "I die, I faint, I fail" for its "vagueness of description and the direct statement of feeling in poetry" (Abrams and Harpham) – they, as Spock himself might have done, much preferred the Vulcan purity of the objective correlative to all that sloppy, vague emotional verbiage.

Read more »
Posted by Tina Quinn Durham at 11:56 AM No comments:

Email ThisBlogThis!Share to TwitterShare to FacebookShare to Pinterest
Labels: Literature

In the 1800s, Percy Bysshe Shelley found inspiration for his famous poem, “The Indian Serenade,” in Middle Eastern poetry.  There was actually a movement or school of poetry known as the English Orientalists, whose work Shelley greatly admired. 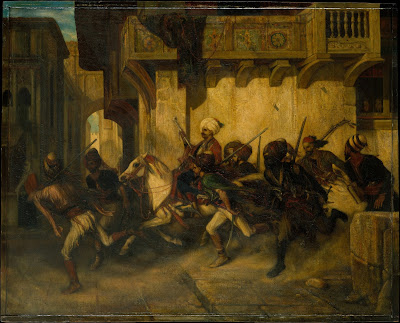 To Europeans, the Middle East was a mysterious place.  Until Napoleon’s army occupied Egypt in 1801, not many Europeans had actually been to the Middle East (Meagher). Even after 1801, many creatives were inspired, not by real-life visits to this exotic destination, but by artwork and descriptions provided by others. (Meagher).

Perhaps unsurprisingly, the artwork created by the Orientalists was biased in favor of European culture and against Middle Eastern peoples and their cultures. In fact, it was so biased that today, some have defined Orientalism as a form of racism:

"Orientalism” is a way of seeing that imagines, emphasizes, exaggerates and distorts differences of Arab peoples and cultures as compared to that of Europe and the U.S. It often involves seeing Arab culture as exotic, backward, uncivilized, and at times dangerous (Arab American National Museum).

Given that some artists deliberately created “propaganda in support of French imperialism, depicting the East as a place of backwardness, lawlessness, or barbarism enlightened and tamed by French rule” (Meagher), it’s not surprising that there were exaggerations and distortions; nor is it surprising that many Europeans readily accepted this interpretation of Middle Eastern culture. It fit handily into their preconceived notions, reinforced their Eurocentric world view and justified the exploitation of those nations.

Nevertheless, many British Orientalists studied Middle Eastern culture with a more open mind, and genuinely admired the literature and artwork of these exciting foreign places.

Posted by Tina Quinn Durham at 10:32 AM No comments:

Email ThisBlogThis!Share to TwitterShare to FacebookShare to Pinterest
Labels: Literature

A Serenade Inspired by a Song - But Which Song?

You might think that if a famous poem were inspired by a song, literary critics or music historians might have a clue, but in the instance of "The Indian Serenade" by Percy Bysshe Shelley, that is not actually the case.  What we have instead are competing theories. You can pick your favorite.

B.A. Park believes that Shelley was inspired by the Irish poet Thomas Moore (who wrote the lyrics to the now-famous “Minstrel Boy”) to write lyrics for an Indian melody:

“The habit appears to have been introduced by Thomas Moore of composing poems to fit wordless or foreign popular melodies, with his Irish Melodies of 1807-1828, and his National Airs of 1819-1828. Shelley’s poem appears to have been written to such a wordless tune from India, played for him by a friend” (9).

Chauncey B. Tinker thought that he had discovered a different source for the same poem:

“The love-song is associated with Miss Sophia Stacey, a young lady whose the Shelleys met in the last months of the poet’s life. She used to sing to Shelley, an experience which always moved him to an intensity of passion and not infrequently to the composition of verses.  One recalls Jane Williams and her singing to the accompaniment of a guitar, which awakened sentiments of the most intense delight in the poet’s heart. ‘I arise from dreams of thee’ may very well have come into existence as the text for some air sung to him by Sophia, though of this there is no proof” (71).

However, Tinker does not believe that “the loved one” of the poem is Miss Stacey (71).

A third theory is that the poem may have originated during a contest between two now-famous poets:

...perhaps (as Trelawny testified in a manuscript now at John Murray's) to use in a competition with Byron, in which each was to compose lyrics to be sung to an Indian or Arabic melody. But whether Shelley recomposed from memory--or else pretended to compose for the first time--a poem that he had already used to impress Stacey, either to demonstrate his poetic facility vis-a-vis Byron, or to express his feelings for Jane Williams, we are faced with judgments of his motives (Reiman).

Judgments aside, Jessica K. Quillin gives us the most Romantic and compelling narrative:

“…the prosodic arrangement of ‘An Indian Serenade’ fits into the general scheme of Mozart’s music for ‘Ah perdona, al primo affetto,’ revealing the possibility that Shelley wrote the lyric with the melody or at least the words of the aria in mind. In any event, the correspondences between ‘I arise from dreams of thee’ and Mozart’s aria reveal the extent to which music formed part of Shelley’s conception of poetic form toward the end of his life. This theory is lent further support in light of Reiman and O’Neill’s hypothesis that Shelley had the fair copy manuscript of ‘An Indian Serenade’ containing the lines from Mozart with him when his boat, the Don Juan, sank off the coast of Viargeggio” (NP).

What could be more appropriate than a Romantic poet dying with both Mozart and a fair copy of a love poem in his possession during a fatal storm that sinks his boat and takes his life? Even if this turns out not to be true, it's a great origin myth and I want the movie rights!

Posted by Tina Quinn Durham at 4:37 PM No comments: